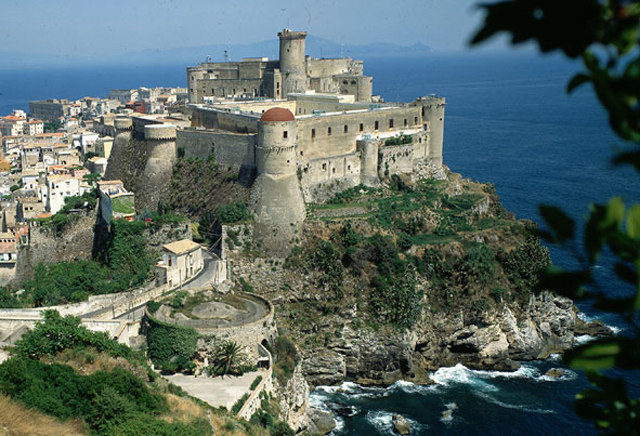 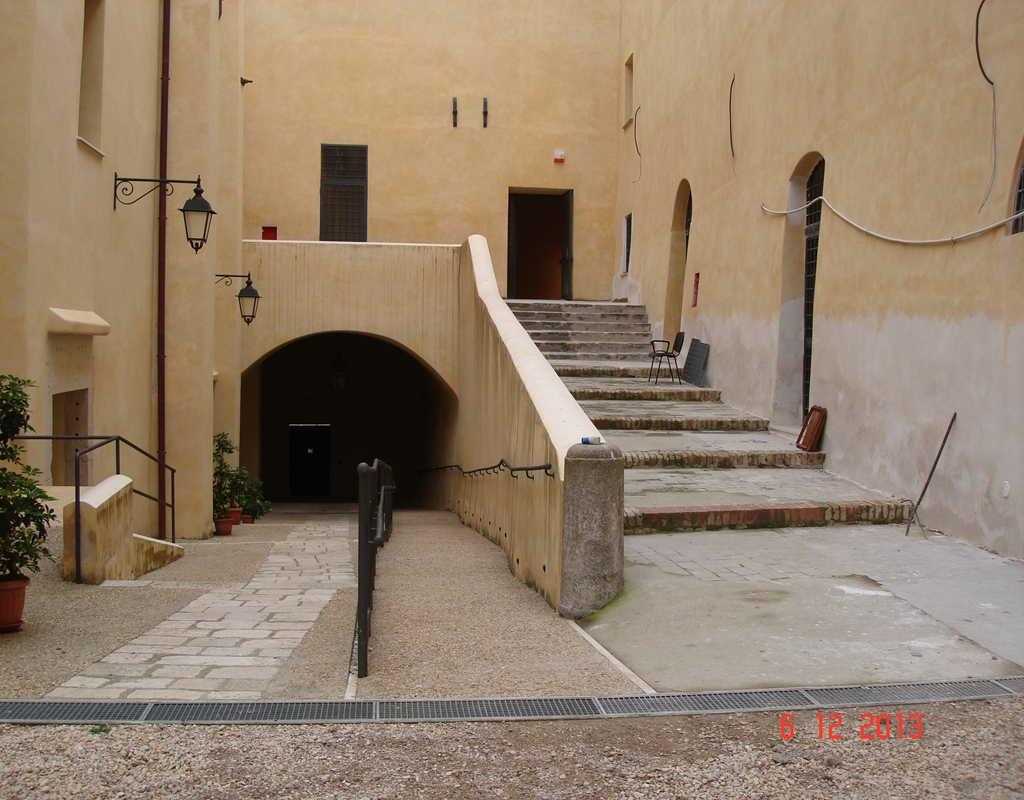 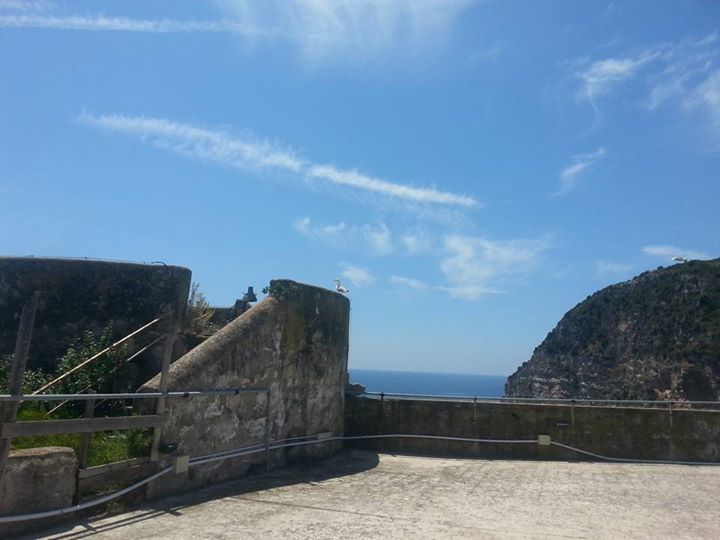 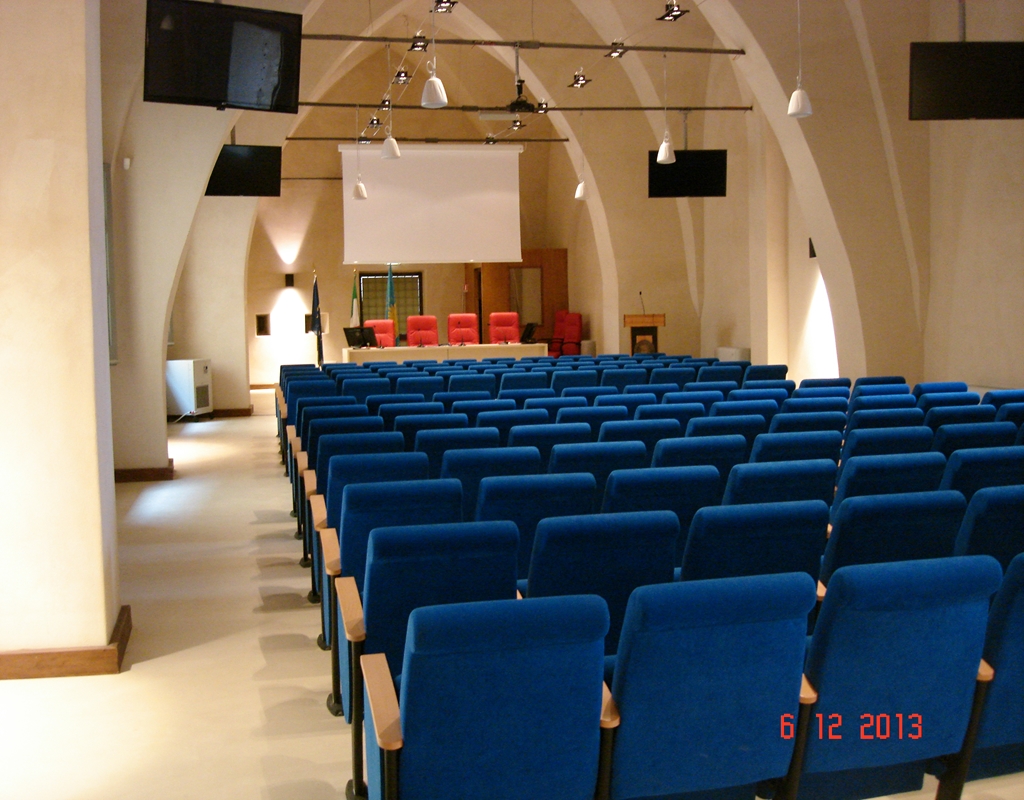 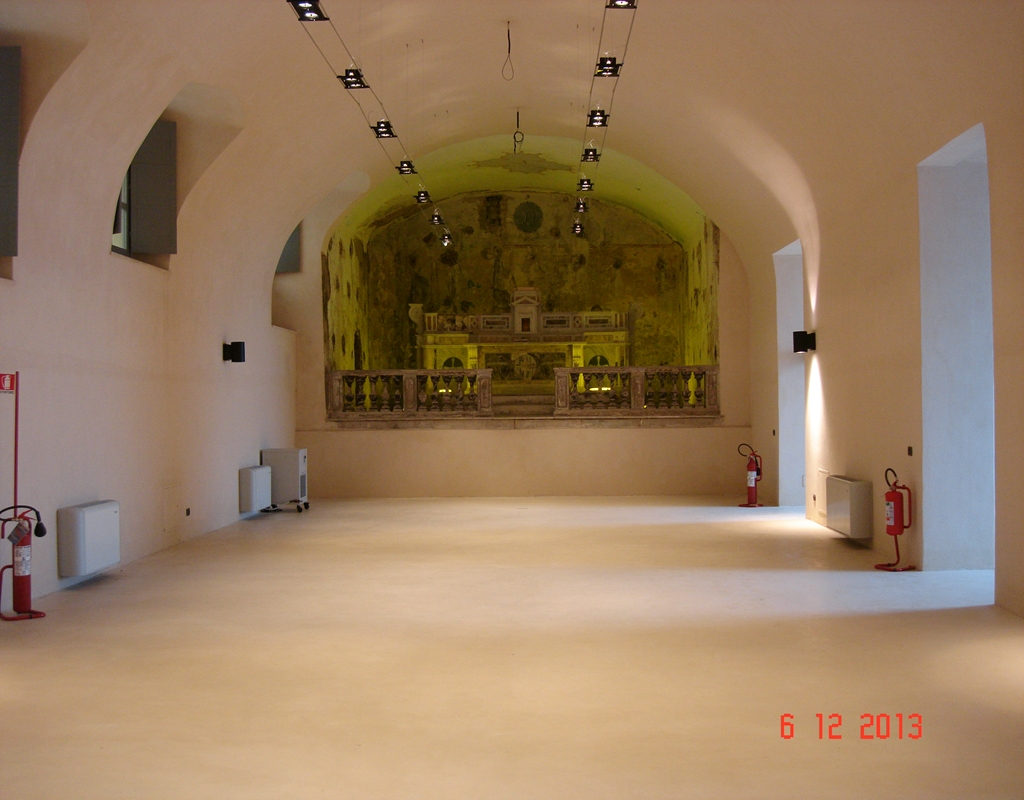 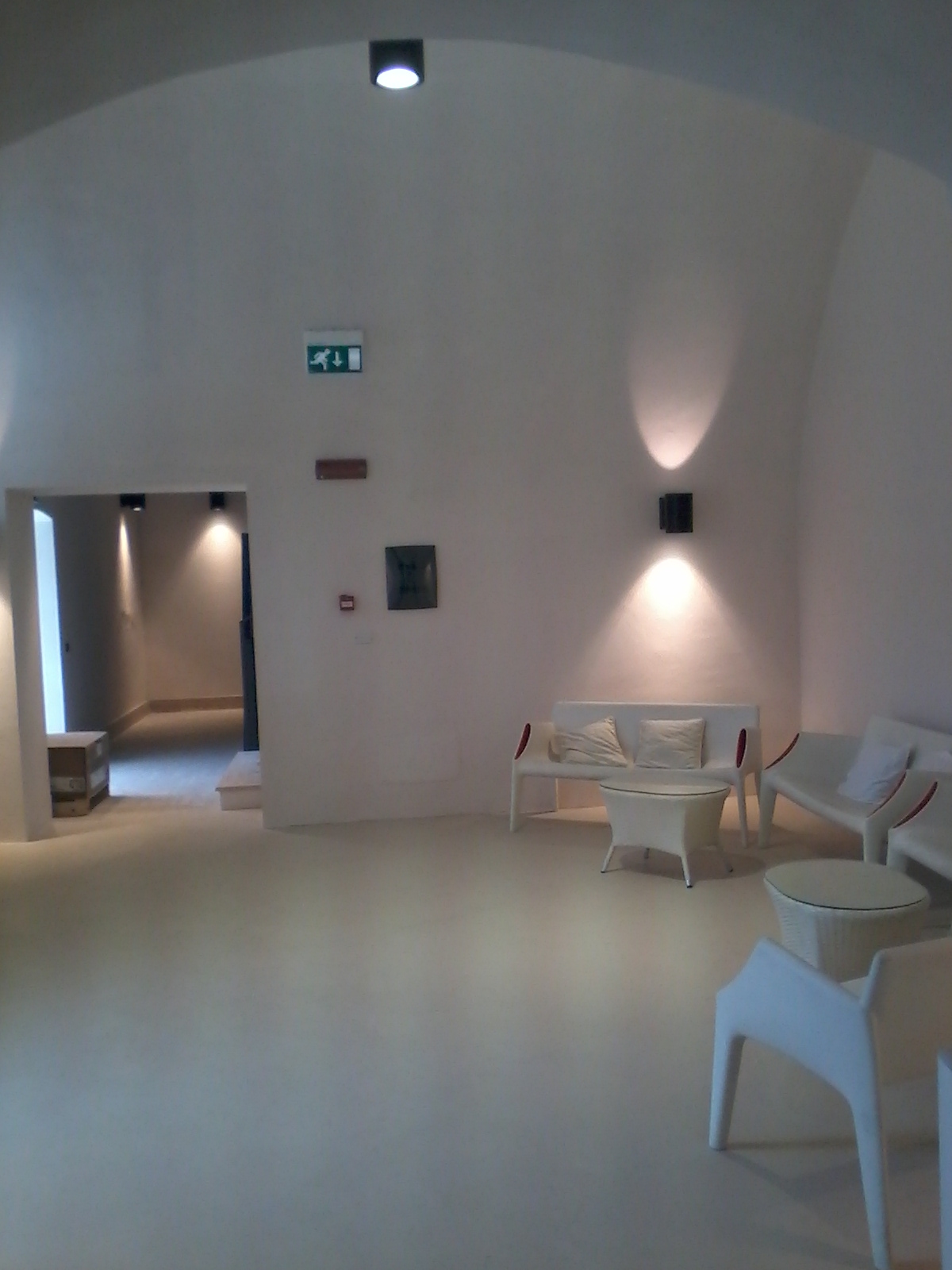 Castle’s history
It is not very clear exactly when the castle had originally been built but according to most historians, the castle might have been constructed during the 6th century during the Gothic Wars or later in the 7th century in order to guard the town from the Lombards. The first documents which mention the castle talk about the decision of Frederick II from Hohenstaufen to strengthen the castle in the year 1233. He had stayed in Gaeta and in the castle on several occasions due to its strategic location during the period of his struggle against the papacy. The current structure of the castle consists of two different buildings. The Angevine is in the lower part of the castle and dates back to the rule of House of Anjou in the area. The Aragonese part is on the top which was built on the orders of the Emperor Charles V along with the other fortifications. With the building of these fortifications, Gaeta became one of the best fortified castles in central Italy. The Angevine part of the castle had a hail till the 1980s and today it belongs to the University of Cassino. This part of the castle is used for various exhibitions and for conferences. The tallest tower’s dome is home to the beautiful Royal Chapel which had been built on the orders of Ferdinand II in the year 1849. 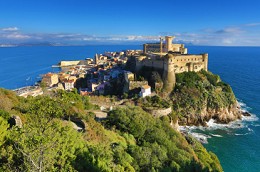 The origin of the name of the city of Gaeta is lost in an intermingling of history and mythology. The legend retold by Virgilius traces back the present name to Caieta, Aenea’s nurse, who died in this place during the wandering of the trojan hero; according to the Roman historian Strabo, instead, the name should derive from the Greek Caietas, “Cavity”, in relation to the many grottoes along the rocky coast.

Gaeta lies on an appendix of the Monti Aurunci that here plunge into the sea, on a stretch of coast in which nature has indulged its whims to create diverse and fascinating environments including the S. Agostino plain with the beach and headland of the same name, the S. Vito creek, the Arenauta beach, the Torre Scissura headland, the Ariana beach with the Torre Viola headland and the Serapo beach, with a residential area lying between the high spurs of Fontania and Mt. Orlando (now a Urban Regional Park). Gaeta is an extremely ancient town, It was a Marine Republic and last bastion of the Bourbon monarchy. A highly important port and resort town in the Roman period, it reached the height of its splendour in the Middle Ages, as is shown by the numerous buildings in the old centre: the S. Erasmo district with the Duomo and annexed Diocesan Museum, the bell-tower, numerous churches and the Anjevin-Aragonese castle. Delightful visits can be made to the so-called Montagna Spaccata on Mt. Orlando, a fissure in the rock which, according to legend, opened when Jesus died; to the Grotta del Turco and to the Sanctuary of the Trinit\E0. 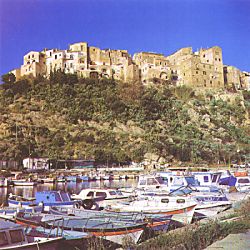 This is one of the most characteristic towns in the province. It stands on the rocky spur of Mt. S. Magno and conserves its original typically Mediterranean core virtually intact, with white buildings, narrow streets and steps descending to the sea; its numerous characteristic bars and restaurants bustle with life in summer. The town owes its picturesque structure to the need to create a strong defensive system against pirates arriving from the sea.

Its original tranquillity made Sperlonga a favourite holiday place among the Romans, in particular the emperor Tiberius and the remains of the walls of his villa are visible on the other side of the headland above the SS Flacca. There are numerous coastal grottoes, the most interesting of which is the so-called “Antro di Tiberio” cave. The area is home to a National Archaeological Museum which, among other things, conserves important marble groups bound to the vicissitudes of Ulysses, most found in the area and in the cave. The holiday resort of Sperlonga, developed directly on the coast is particularly lovely, with the fine beaches of Canzatora, d’Angolo, Bazzano and Bambole. 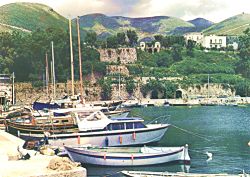 Formia lies on the slopes of the Monti Aurunci between the elegant Vindicio beach and the green Gianola headland, at the centre of the Gulf of Gaeta. The origins of Formia are linked to the legend of Troy and Ulysses’ travels on his return journey.

Of pre-Italic and Auruncoformation, as demonstrated by the ring of polygonal walls and numerous other remains scattered all over the territory, Formia was even in Roman times a popular holiday resort and conserves the ruins of numerous villas. The sights include the “piscinae”, the remains of the small Roman and later Bourboni harbour of Caposele, the ruins of the temple of Janus, Trajan’s theatre and the remains of the amphitheatre. Formia has four ancient districts: on the hill Castellonorato, Maranola and Invio; Penitro on the plain. It boasts an enviable climate which together with the beaches of Vindicio, Acquatraversa, S. Janni and Gianola, make it a sought-after tourist destination. 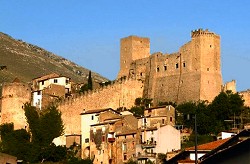 Itri links the Monti Ausoni and Aurunci and is situated at a height of 170 metres on the slopes of the latter. It has a small stretch of coastal territory. The oldest and most interesting settlement, with dwellings in pyramidal groups round the castle, lies on the Colle S. Angelo; the most modern centre is situated on the plain, along the Appian Way, of which some sections can still be seen, as well as funerary monuments and strong retaining walls.

Precious traces of the mediaeval period remain in the ruins of the majestic castle, clearly visible from the road. Other monuments worthy of note are the churches of S. Michele Arcangelo, with its fine bell-tower and the Annunziata. Ten kilometres or so from Itri, on Mt. Fusto (670 m), overlooking the sweeping panorama of hills and sea, stands the Sanctuary of the Madonna della Civita, the object of numerous pilgrimages and containing many ex-votos. The famous bandit Michele Pezza, known as Fr\E0 Diavolo, was born at Itri. A large expanse of olive groves makes Itri a producer of excellent quality olives and oil, celebrated with a festival in August. The feast of the Madonna della Civita and the Infiorata procession held for Corpus Christi are particularly popular. 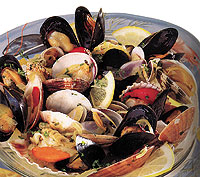 Just as here fine beaches and lovely rocks alternate with hilly areas, the Pontine cuisine manages to combine avariety of sometimes humble ingredients and turn them into simple but rich-tasting dishes. There are special dishes such as Granunchi, baked frogs or Ciammaruche (snails) cooked in a spicy sauce or dressed with a special green sauce or the goat sauce for pasta of Campodimele.

The Bazzoffia, a spring vegetable and pulse soup cooked at length in water and served on slices of country bread, with the addition of a beaten egg and a sprinkling of Pecorino cheese.The Rappacacornuti soup of Roccagorga, fast and easy to prepare, is made with vegetables and served with slices of country bread. A few kilometres from the hill, the coastal towns offer fish, shellfish and molluscs cooked and served to the best traditions, from fish soup prepared with a tasty scorpion-fish to fragrant fried squid and prawns, from delicious pasta sauces made with crabmeat to delicate and tasty sole and gilthead. These “strong” flavours are complimented by the local red and white wines, with an average-low alcohol content, produced in the area between Bassiano and Sezze; these include Cori white and red (DOC), Merlot, Circeo Red, White and Ros\E9, Trebbiano and Sangiovese of Aprilia.